Russell - the saga of a peaceful man
Article info 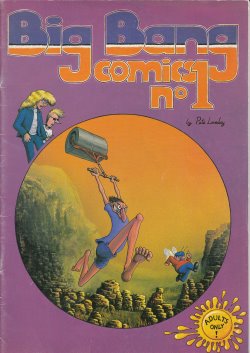 1983, my first Green Gathering, not, probably the ideal year to form a balanced view of the event but I was fairly out of balance myself at the time.

I arrived without the plot, I left with it, in particular the plot for my first full-length solo comic, or most of it. Recovering my own plot and drawing the comic took a little longer.

I never wanted to do an autobiographical comic. I'm not Russell, Russell isn't me, even though we have some opinions, attitudes and tastes in common. Its our reactions that are different, and thus our lives. But for all that I took the easy way out and used some ready made experiences, Somehow being woken by a furious confrontation between a goat owner and a goose owner was perfect as it stood ... In a way, as an awakening, it was the highest point of my day, whereas for Russell it was just the opening moment of an insane adventure.

I was only there for, I think, 3 days - we met by chance an old friend and her work partner - dancers performing at their first Green Gathering and not altogether enjoying it, so we all fled the heat and the mild stench in time to enjoy a gorgeous sunset whilst floating in the shallows of a North Devon beach. Would have liked to have stayed longer but that water felt so good and anyway I'd come back with far more than I'd ever get into that first comic without leaving out the rest of the story.

Maybe, one day, I'll get some of the unused but so hilarious episodes into the big retrospective festie comic that I'd love to do if only I had the energy ... 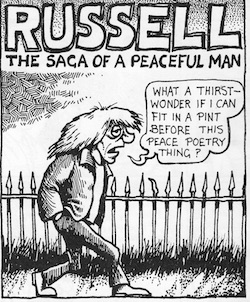 We are bringing you the story of Russell's visit to the Green Gathering Verdant Venue as a daily feature in the run up to this year's Green Gathering in Chepstow (3-5th August). But before we begin you need a little background as we will start with Russell setting off for the festival (we will bring you the rest of the story at some appropriate point or points in the future).We first meet Russell on his way to a "Peace Poetry" event as he decides to dive into a pub for a quick pint to help gird his loins for the evening to come. 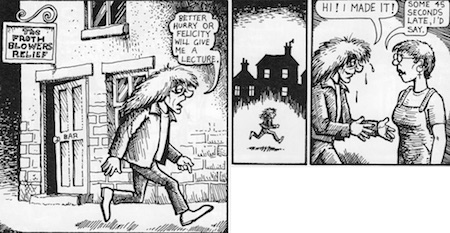 After a bizarre episode in the pub triggered by his appearance but not affecting him, he rushes to meet his girlfriend Felicity who has persuaded him to attend the event, but now ducks out citing a "Sisters against rape self-defence workshop" she is going to instead.

Continuing on his somewhat reluctant way to the Poems for Peace event Russell bumps into his mate Young Andy, and together they endure a "foretaste of eternity on very hard chairs" as the eastern mystic poet Num Bum performs his works to general aclaim and some cynicism from Andy and Russell. 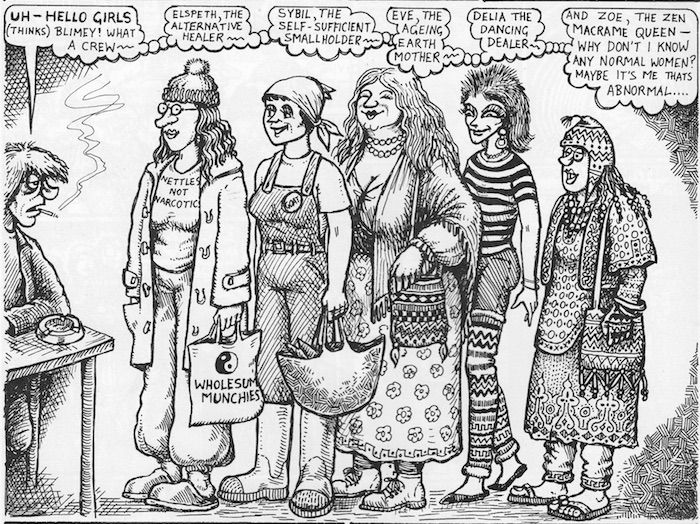 After the gig Andy undergoes a "surprising" conversion in his opinion and departs with two new "friends",  leaving Russell to repair to the pub to meet Felicity where he encounters some of Felicity's radical feminist friends.

At home he finds their flat taken over as a "Women's Space" and Russell is sent out job-hunting, with predictable lack of success. 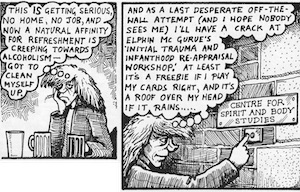 Following a tip he tries joining an alternative therapy group and fleeing from the chaos he creates (and creating more as he goes) he returns home to find himself thrown out by the women. Only one viable course of action remains...

The "Verdant Venue" is being held at Wormsworthy and is billed as "the temporary Mecca for all those who seek a sound, organic, de-centralised, non-nuclear future for mankind"

Join us over the next few days as we follow Russell on his journey to, and through, the Verdant Venue. Festival veterans of any age will recognise many of the scenes. A new panel will appear each day (click on the title or read-more link for a full size legible version) in the run up to the REAL GREEN GATHERING 2018. Join us there for real life fun and action beyond mere hedonism...

And if you want more Russell check out the website http://www.russellsaga.com/market.html

Russell - the saga of a peaceful man