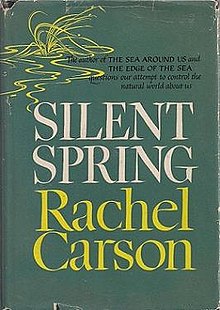 In the late 1950s Rachel Carson studied the effects of synthetic pesticides. The result of her work, published in 1962, accused the chemical industry of spreading disinformation which was unquestioningly accepted by public officials. The title refers to the possible consequences of long term mass pesticide use - a spring without birdsong.

Despite fierce opposition from the pesticide companies, it generated a large public debate and resulted in the banning of DDT for agricultural purposes and led inspired the creation of the USA Environmental Protection Agency.


Add comment
We welcome useful constructive comments and suggestions. Comments are moderated. If your comment is not for publication then say so. For longer suggestions and contributions please email us - info at green-history dot uk.
If you are registered as a user on Green-History then you need to login before commenting and you'll bypass the moderation. Or use a different email address if you have one
JComments